Diamond in the Shade 1 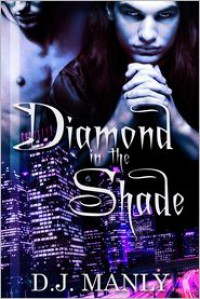 Diamond in the Shade is an interesting take on a vampire hunter falling for a vampire. In this case the vampire hunter - or Destroyer - in question is an orphan known only as Diamond. Abandoned as a baby, Diamond was left to die on the steps of a Hungarian orphanage in the middle of winter. But he survived the night and was taken in by a monastic society of vampire killers known as Destroyers. Trained from infancy to be a weapon, Diamond knows nothing but killing, feels nothing but duty.

Enter Sebastian Shade. A vampire who'd found his humanity in the arms of another Destroyer over a century before. Tanus the Destroyer had loved Sebastian and had given him a purpose and a reason, to protect humanity from others of his own kind. Even after his death Shade continued to protect humanity, eventually making his way to the new world and settling in New York. But the new world has new rules - and a vampire counsel - that help to keep the status quo between vampires and mortals. Unless the vampires go rogue. And that's where Sebastian stepped in and took care of the problem.

Sebastian now has a team of humans helping him stop the rogues, but this new rogue is beyond even them, forcing Sebastian and the hunter sent to destroy him to work together. A witch turned vampire is stealing babies for an ancient blood ritual. And everyone knows blood rituals are bad news.

As Diamond and Shade work together the unfeeling Destroyer begins to develop feelings for the monster he wants to kill, and said monster is once more falling in love with a mortal. The last time nearly killed him, losing Tanus all but destroyed Shade. How will he survive Diamond?

Read the book and find out.