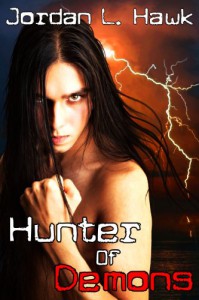 I've long been a fan of Jordan L. Hawk's Widdershins series and recently got into the Hexworld series so I decided to give SPECTR a try... I'm glad I did!

Hunter of Demons is a unique twist on a paranormal m/m story that had my interest from page one. The book follows Caleb Jansen, a closeted 'mal' - someone with paranormal ability - in a world where 'mals' are registered and kept an eye on. Caleb had spent his life hiding and flying under the radar until his older brother Ben was killed and then the body just got up and walked out of the funeral home. In a twist of fate, Caleb is thrust into the attention of SPECTR, the government agency that trains and uses paranormals to police the paranormal community.

Without giving the plot away, Caleb comes face to 'face' with his brother's body snatcher and then is forced to deal with the fallout of his ill thought out decision to seek vengeance with a group of anti-mal anarchists. Enter John Starkweather, a hot agent who has 'drunk the SPECTR koolaid' and was the agent responsible for investigating brother Ben's death. John only wants to help Caleb regain sole possession of his body but it turns out the entity within Caleb isn't a demon after all, and has an agenda similar to Caleb's - finding and destroying the demon that killed his brother.

Starkweather and Caleb are forced together by fate and forces beyond their control. They end up working together to solve Ben's death and as they do attraction sparks. But things aren't what they seem at SPECTR... and the entity in Caleb isn't going anywhere now that it's had a taste of what it's like to inhabit a living body instead of a corpse.

This book is a HFN with a Sword of Damocles type cliff hanger ending. I'm hooked. Off to read book two!