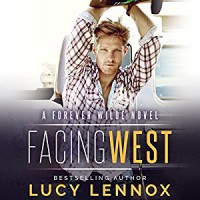 I've read Borrowing Blue - need to get back to the rest of the series - by Lucy Lennox and she has a 'guy meets prince' story just out that I wanted to read so I figured I should read the first book in the series. I was glad I did.

Facing West had me a sniffling, sobbing mess but, damn, it hurt so good!

We start the story going back in time to a teenaged Weston Wilde's first experience as a gay teen and also catch the slightest glimpse of Nico Salerno. We also meet Curt, who is a pretty stereo-typical, deeply closeted, gay jock asshole - who is my least favorite character in this book and - a little too stereo-typical for my taste. But the rest of the cast of characters I loved.

Nico was a troubled youth who ran away and grew into a man on the streets, sacrificing himself for his mother and sister's happiness, but making something of himself in the process. He marches to his own drummer and is proud of what he's accomplished but his past still makes him doubt his self worth and a relationship gone wrong made him distrust all men and vow to never give his heart again.

West grew up the member of a huge family, out and proud and accepted. He had the respect of their hometown, became a doctor, took over his grandfather's practice and became best friends with Nico's older sister. And then she died in childbirth, leaving an innocent little baby behind as a legacy.

Nico is sucked back into the small town he'd abandoned, a place he had never felt like he fit into, as he is named custodian of his sister's newborn child. He has to process the grief the death of a sister he hadn't seen in almost two decades, a mother he didn't know had died, and take care of a helpless little baby all while trying to settle his sister's estate and make the decision to give his only living relative up for adoption.

Curt, the asshole, makes a reappearance. Except he's now Nico's stepbrother and has become a cop intent on giving Nico a hard time. West, has his own issues with Nico, blaming the young man for abandoning his sister without knowing the reason why, but he can't deny his attraction to the other man.

Over the course of the book Nico tells West his story, West learns that you really shouldn't judge a book by it's cover, and the two of them fall in love. A misunderstanding, a twist of fate, and Nico flees back to San Francisco, thinking he'd lost everything. But there's a happy ever after for Nico... and for West.
Tweet